Tarpon are one of the most sought after game fish on the planet.  Pound for pound these prehistoric fish provide anglers with the ultimate angling challenge.  Besides fighting hard, these fish also put on quite a show as they leap clear out of the water.

Most tarpon we catch range from approximately 30–150 pounds.  Fight times can vary greatly from 5 minutes to well over an hour and occasionally two hours. 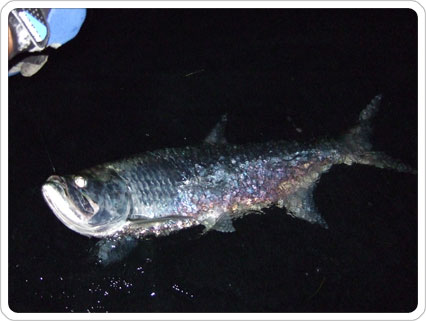 One of the best things about tarpon fishing is that it is usually done in the evening once most boats are off the water and the temperatures begin to cool.  Most of the fishing is done inshore or near shore.

Many fish are caught within sight of the glamour and glitter of our very own South Beach.  Where else could you enjoy world class fishing in such a densely populated major metropolitan area?

Tarpon can be caught using several different baits and techniques.  The most common method for catching tarpon is by drifting a live shrimp near the bottom.  Later on in the season we’ll start using small blue crabs which often get the attention of some prize size permit.  Permit themselves are without a doubt one of the most popular target species, especially along the flats.

Another popular way of catching tarpon is by fishing around one of many bridges that line our beautiful bay.  Fish caught around the bridges are usually feeding on shrimp and therefore are best targeted by drifting live shrimp where they live.  Fly anglers also do very well when using flies that imitate shrimp. 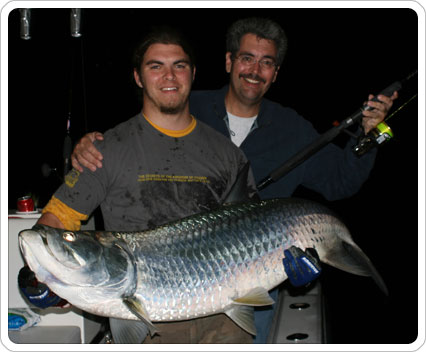 On many nights it is not uncommon to hook into several tarpon using this method.  The bridge tarpon tend to be a bit smaller than their bigger cousins that live in and around Government Cut (our main shipping channel) averaging about 20-60 lbs.

During the fall when mullet are migrating along the beaches, tarpon will zero in on them and the mullet become the bait of choice.  Mullet can be drifted along or slow trolled and usually don’t last long when tarpon are anywhere in the vicinity.  Most of this action takes place late in the day so there is no need to take the day off.

Hardcore anglers know this and sometimes combine an afternoon of sailfishing offshore with and evening of tarpon fishing.  Where else can you sleep in and then catch a sailfish and a tarpon on the same day.  Needless to say this is one of the most popular trips we offer.