Light tackle Shark Fishing in Miami and South Florida is one of the most thrilling experiences any angler can enjoy both inshore as well as offshore.  Our waters are home to a variety of shark species that are both small and very large.  Relying on their extremely sharp senses, they easily pick up the vibrations sent out by a wounded fish or the scent of fresh chum. 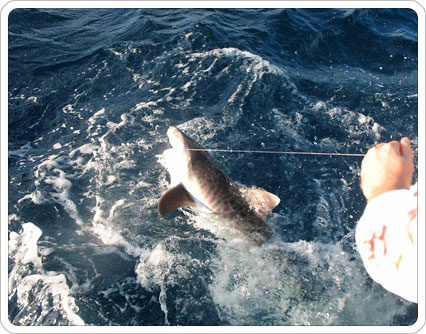 Contrary to popular belief, sharks are not the man eaters that Hollywood has portrayed them to be.  Shark fishing is actually a relatively safe activity that can be enjoyed by everyone regardless of age or experience level.

Our back yard is home to a wide range of common and not so common varieties of sharks.  Some of the more common species that we encounter are Bull Sharks, Hammerhead Sharks, Lemon Sharks, and Blacktip Sharks.

Of course, these are only a fraction of what is available and you never really know what will inhale your bait.  Most sharks in the 4’-7’ range are quite manageable but there is always the chance of running into a giant.

People often ask about the best time to target sharks and the truth is that they are here year-round, but seem to be more prevalent during the cooler months as they migrate into our warm waters.

Shark fishing can also be very productive during the night if you don’t mind wrestling a toothy critter in the dark. 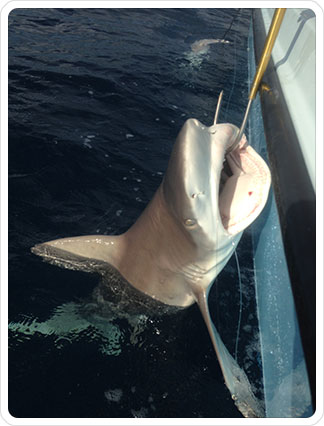 We often worry and complain about sharks as though they are some type of nuisance.  Research has actually shown that sharks are really not as dangerous to swimmers as we may think. Also, as one of the top predators in the ocean they provide an important role in the ecosystem and help maintain a healthy balance.

Experienced fishermen know that when you find fish, sharks are not far behind.  Anyone that has fished in salt water has probably lost a nice fish to a shark (a.k.a. “The Tax Man”).

Due to their relatively poor food quality and current numbers there is really no reason to harvest one of these majestic creatures.  Anglers wishing for a memento of their catch can take photos prior to the release and/or order a fiberglass replica of the fish from our friends at King Sailfish Mounts. Don’t let the name fool you, they are quite skilled at all types of mounts including sharks.