Finally, after a lot of waiting, cold fronts are once again starting to push down through South Florida. Everyone knows that many of the fish that we target are the direct result of colder temps in areas to the North of us. Not only are fish starting to come through but bait fish are also starting to show up with a lot more consistency. Although the action has been a bit sporadic, some sailfish are starting to show and are being caught almost daily. Just today I heard a report of one boat catching and releasing six spindlebeaks in only a few hours of fishing. I was not surprised since I was out bait fishing last night when the latest from moved over our area. Overnight the winds shifted and started blowing hard out of the North making sailfish cruise the surface “tailing” while swimming South.

Another key factor to good fishing is a good northerly current. On days when the current has been weak or non existent the fish has been tough. Luckily, many of the deeper wrecks, ledges, and other structures have been holding enough fish to keep things interesting. On my last trip we ran out with a livewell full of frisky baits but it didn’t make a bit of difference. We deployed two kites and dangled two to three baits from each but the fish just ignored our offerings. Shortly, thereafter the decision was made to drop run out a little deeper and drop down to an assortment of snapper, grouper, and almaco jacks that rule these spots. 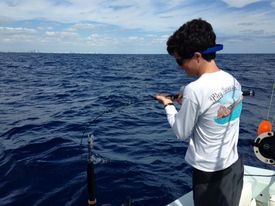 Action was a little slow at first but persistence paid off and after hitting a few favorite spots we began to hook up pretty consistently. We actually lost a couple of fish to sharks and one busted off. After a few more drops we had about six very respectable almaco jacks, and a snowy grouper. We later turned these fish into some beautiful fillets. We were all happy with the decision to switch gears and put some fish in the box.

Besides those species already mentioned, there are some other species that have finally arrived and will stick around for a while. Among those species are cero and Spanish mackerel. Both of these will be responsible for a lot of rod bending action. On recent trips I’ve seen lots of ceros sky rocketing out of the water while attacking ballyhoo. Speaking of ballyhoo, I saw huge school of them last night while heading back in from a bait fishing trip. Ballyhoo are a huge part of the food chain and a staple for many of our most popular game fish.

Well there you have it, fishing should continue to improve and become more consistent with each passing front. Over the last month we’ve been preparing for the action that is yet to come. We’ve been going over all of the gear, respooling lines on reels, and loading up on baits of all sorts. Having a couple of bait pens stocked with quality bait is one of the best ways to insure success.

November is the unofficial start of the charter fishing season here in Florida and this year is no exception. Everything is starting to pick up and pretty soon there won’t be many days open. If you’re planning your next trip you might want to book it early or you might be completely shut out. Don’t forget to follow the action on Facebook, Twitter, and now Instagram under #nomadfishing.


Back to Main Fishing Report Page