First, I’d like to wish everyone a great Thanksgiving Day. Today is truly a day to reflect on all of our blessings. Speaking of blessing, the fishing has been good to excellent over the last couple of weeks. Unfortunately, we did have a period of high winds and lots of rain that made it tough to get out. Right now the conditions are beautiful and the temperature has actually come down quite a bit.

Cold fronts mean fishing the edge for sailfish, dolphin, kingfish, and even wahoo, and bottom fish. On my last couple of trips we had a combination of all these species with the exception of wahoo. We have been primarily kite fishing for sailfish but have also caught our fair share of mahi, kingfish, and really nice mutton snapper. 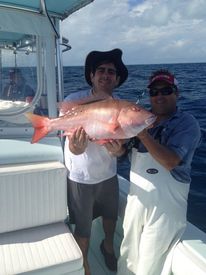 Vic and his party had a great day after a slow start. We broke the ice with a nice kingfish that ate a threadfin herring fished on a flat line. Our next fish was a sailfish that chased down a small goggle eye fished under a kite. After the action slowed a bit, we made a short run to the south were we were quickly rewarded with a three beautiful and tasty mutton snapper. All three were caught on a “secret” bottom bait. We also caught added another kingfish off the kite. Toward the end of the trip we had a pod of small sailfish that played with our baits but would not eat. We ended that trip going 1 for 2 on the sails. 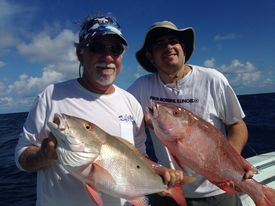 JJ and his son wanted to catch their first sailfish of the season. On this day the fishing wasn’t as bountiful but we caught a nice kingfish, and went 1 for 2 on the sails. Kingfish also accounted for several more cutoffs. The sailfish was photographed and quickly released to fight another day. Later in the day the winds kicked up near 30 knots and we decided to head in a bit early and prepare for our next trip were we hope to target swordfish (check it out on the next report). 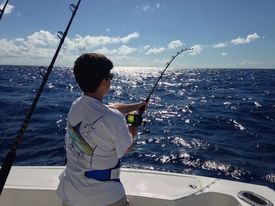 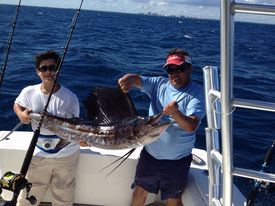 Today, I’m spending the day at home with my family and will be pulling the boat out of the water tomorrow for a quick oil change and routing maintenance before heading back out for more action.

Well, that pretty much sums things up for now. Remember to follow the action on Facebook, Twitter, and Instagram for shorter up to the minute reports and happenings. You can also check out some videos on our YOUTUBE channel (fishingchartermiami). If you’re looking to go fishing, now is a good time to book your trip. You can call, email, or text for any additional information that you may need. I still have a few days left in December as well as January.


Back to Main Fishing Report Page