Over the last couple of weeks the "Nomad" has been getting some major upgrades. Before I get to all of the details I wanted to give a big thanks to Joey Clawges of SunDance Marine in Ft. Lauderdale for doing a great job on my repowering job. Mercury Marine was also instrumental in getting us all of the equipment in a timely manner.

The boat is now powered by a pair of Mercury 150 HP four stroke engines. Besides the engines we also installed new Smart Craft gauges and controls. Basically this all translates to better smoother, quieter operation. Now, I have increased range that will allow me to fish areas that in the past were just out of reach. To say that I am excited is an understatement. 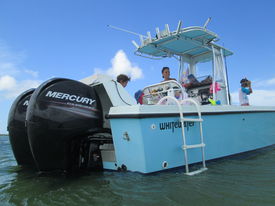 The boat is back in the water now and ready to go fishing. Over the last few days the dolphin bite has slowed a bit but should pick up again any day now. The best fishing has been for snapper of any kind and grouper. The larger mutton snapper and grouper such as the gags and blacks are being caught on or near the countless artificial wrecks and reefs that line our coast.

On the shallower reefs mangrove snapper are the name of the of the game. The best action for mangroves is after dark with the action steadily improving later in the night. If you prefer to fish during the daylight hours then yellowtail is what you should be targetting. The key to catching these tasty fish is to anchor up on and chum heavily while freelining baits in the chum. Yellowtail will also bite very well after dark especially on darker nights.

Live bait fishing during the day has been yielding a few kingfish, bonito, and even an ocassional sailfish. The biggest challenge has been getting enough quality bait. Bait has been scarce lately but just like everything else that can change quickly.

I have several trips coming up and will probably be putting up another report soon. I will try to take some pictures and video to share with everyone both here and on my Facebook, Google +, and Twitter pages. If your not already following the action make sure you LIKE us and keep yourself updated.

Well, that pretty much sums things up for right now. If you'd like to chase some mahi or pull on some snapper now is the time to book your trip. Like always, you can call, email, or even text your questions and book your trips.