September and October are transition months for South Florida fishing. Offshore, dolphin fishing has been a hit or miss proposition. The best action seems to coincide with good weather and calm seas. On the edge, there are still a few sailfish around and can sometimes be seen free jumping while targeting other species over the wrecks and shallower reefs. Bonitos have been pretty thick especially if you are fishing smaller live baits like herring or pilchards. Kingfish have also been hitting in the early morning hours. Finally, all types of snapper have been pretty active around the shallower wrecks and reefs down South. 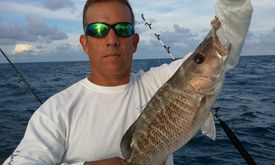 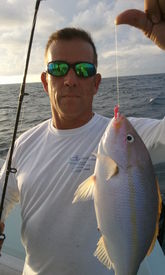 On recent trips we’ve been pretty flexible as to what we target and catch. Most action has come from bottom fish such as yellowtail and mangrove snapper. We’ve also caught some large sharks and many bonito. On several trips including yesterdays’ we had to dodge rain and strong thunderstorms. Again, the key is flexibility. Thursday, we went out for and after noon of yellowtail fishing. I knew the mangrove snapper would probably be thinning out but the exact opposite happened. We boated several large mangrove snapper with the largest weighing about 5-6 pounds and only one very large yellowtail. Also in the mix were a couple of smaller grouper. Another interesting fact was that all of the snapper were caught during the daylight hours and actually shut down after dark (go figure). 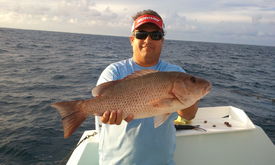 Yesterday I was fishing with a father and his seven year old son. The plan was to fish a half day morning trip. Well, we had to wait for a large thunderstorm to roll through before we could head out. Remember that safety should always come first. Finally, at around 10:00 am the skies began to clear enough to safely proceed. Our first bite was a memorable one. An estimated 200 pound shark ate a goggle fished deep and proceeds to leap clear out of the water twice. It was tough to identify the species of shark but I know it wasn’t a mako. Also, it was definitely too large to be a spinner or blacktip. Well, after almost spooling the 20 pound spinning reel two or three times the shark swam down to the bottom and stayed there for another 30 minutes or so. We tried to stay straight up and down on him but in the end he managed to cut through the light monofilament line. Afterwards, we managed to bend our rods on some grouper, bonito, triggers, and some other reefs dwellers before heading back to the dock. 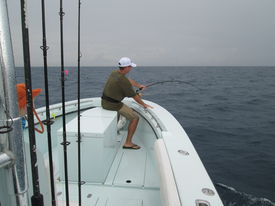 Last season we caught a lot of fish and this season preparations are starting earlier in hopes of topping that. The new Mercury outboards are running great and have added speed and range to the boat. Also, I will be adding another bait pen in order to insure a healthy supply of bait throughout the season. Last week I also started night fishing for goggle eyes in order to get ready for tournaments and charters alike. You can book your charter by calling 786-266-0171 or by email: omuniz@bellsouth.net. Also, you can now follow the action via social media like: Facebook, Google+, Twitter, and now Instagram.