Exciting Start to the New Year

Wow! It seems that 2013 flew by and 2014 is here and full of promise. It’s been a while since my last report so I’ll try to summarize the action the best that I can. December had me fishing both inshore and offshore. Inshore we caught trout in the day and tarpon at night. Offshore we caught a mix of sailfish and mahi. We also fished the No Rules Sailfish tournament last week and did very well (more details to follow).

Carlos and his family were visiting from Texas and wanted to get out and do some inshore fishing in calm waters. I suggested we try some trout fishing over the grass flats around Key Biscayne and it turned out to be a great call. Everyone got in on the action and caught more than their fair share. We also caught a two or three large gator trout. Besides the trout we also caught an assortment of jacks, and snapper. All of our fish were caught using a live shrimp and popping cork combinations.

Inshore, we also had a couple of tarpon trips and it turned out to be a feast or famine kind of bite. On one night we decided to fish the bridges because of favorable tides. We could hear fish popping as soon as we pulled up to the first spot and I knew it was going to be good. We got a few bites and ended up going 3 for 4 on tarpon. Two nights later I was fished Government Cut and the bridge but results were very different. We didn’t get any bites at the cut and decided to give the bridge a shot. The fish appeared to be there but several boats were zipping around and that seemed to put the poons on the defensive. We ended the night with only one shot and that fish managed to pull the hook.

Offshore, I fished with repeat client Jamie and his son. We were greeted with green water, slick calm seas and no current. One advantage we did have was quality live bait. I brought along some goggle eyes and herring that I had caught previously and boy did they help out. We had a sailfish and several other bites while the rest of the fleet was still making bait. Later in the day the action slowed and we decided to explore some new spots but didn’t catch anything worthwhile.

Damar and his buddies were here from Wisconsin where it was 15 degrees below zero. The trio wanted to go offshore for a half day and so we headed out. Conditions were not the best and the winds were up but the guys hung in there and we manage to catch a nice dolphin and a shark before the rain chased us back to the dock. The boys aren’t going to forget the taste of fresh mahi any time soon. 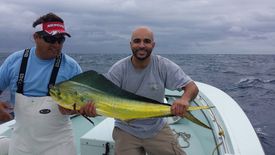 A few days ago I fished the No Rules Sailfish Tournament and boy did we have fun. So far, this tournament has been very good to me. Last year I fished aboard the winning boat and this year I decided to fish it on my boat. Our team was 4 for 5 and was in a five way tie for the lead with only minutes left. We managed to hook up and land our fish before any of the other boats making us the “unofficial” winners with a total of 5 sailfish releases. Unfortunately, there was an issue with the video of the last fish causing it to be disqualified. Although it was disappointing, we understand that the rules exist for a reason. Nonetheless, we had a great time hanging out with great people and enjoying the camaraderie. We’ll definitely be back next year. 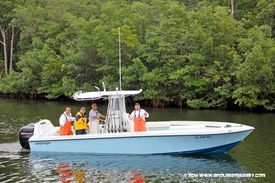 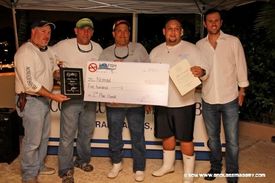 Well, that pretty much does it for now. Don’t forget to LIKE and follow us on Facebook, Twitter, and event Instagram. If videos are more your thing check us out on Youtube. Fishing should get better and better as we head further into the winter season. More sailfish and tarpon will be moving down our way with every passing front. Like always, you can check out our webpage for more information and call, email, or text any questions you may have. The boat will be out of the water for some routing maintenance during the next couple of days but we’ll be back in business very soon.