The last couple of months have been interesting to say the least. September and October are usually the slowest time of the year and the time to take care of boat and tackle maintenance. This year has been that way except that we’ve had a long period of windy weather. I think we’ve only had two or three calm days in the last month or so. Unfortunately, the strong winds have force us to cancel or reschedule trips due to safety concerns. On the days that we have been out, the fishing has been good to excellent.

During September we had several bottom fishing trips that were quite successful. We caught our limit of yellowtail or close to that on 2 or 3 of our trips. Most people usually think of the Keys or Bahamas when they think snapper fishing but we’ve been very successful fishing right here during the daytime hours. Mixed in with the snapper, our anglers have also caught a bunch of large jack crevalles and barracudas. Although we release all of the jacks and cudas, they are an awful lot of fun on the light spinning tackle. 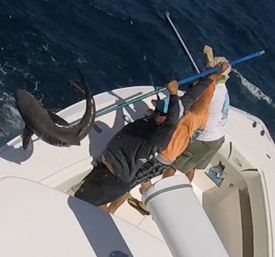 October has been pretty since we narrowly dodged hurricane Matthew. The windy weather actually triggered a hot early season sailfish bite. Most of the sails have been caught on live bait fished off the kites. Our sails have been eating herring, pilchards, and blue runners. Besides the sails, a good number of kings have moved into the area along with a few nice mahi mixed in. The dolphin have been eating the same live baits both off the kite and on the flatlines. 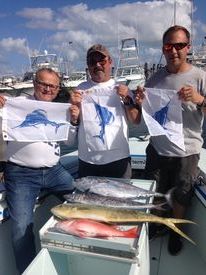 Last year, we had a lot of dolphin and sailfish chasing schools of ballyhoo up in the shallow reefs and it looks like we are in store for a lot of the same this year. The key to catching this fish in to zero in on the diving birds trying to catch the fleeing ballyhoo. Many of the dolphin being caught recently are really nice size with lots of gaffers mixed in.

The first sailfish tournament of the season is scheduled in roughly two weeks. If things continue on their present path, I would suspect that it will take double figures to win the event. Speaking of sailfish tournaments, I will be fishing the Operation Sailfish event up in Palm Beach in early December and possibly the entire Quest for the Crest series of tournaments. Until then, a lot of time will be spent on the water both charter fishing and bait fishing. 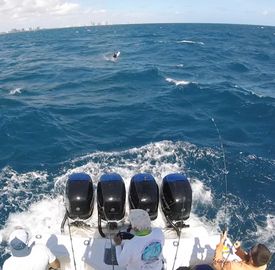 Finally, for those of you interested. I will be conducting more seminars at the Miami Bass Pro Shops located at Dolphin Mall. Topics, dates, and times will be announced on my website and also on my Instagram and Facebook pages. Don’t forget to stop by and say hello.