Even though today is the first day of fall, it really doesn’t feel like it right now. We had to cancel our trip this morning due to the torrential rains and some high winds. My customers who were down here from Brazil decided they would rather stay dry and hang out at the beach. Now, let’s talk a little more about the fishing.

I’ve done a lot of trips over the last few weeks and we’ve been catching a variety of species both in on the reef and also offshore. Most of the action has come in the way bonitos, kingfish, sharks (lots of sharks), snapper, and jacks. We did do one cubera trip in which we enjoyed very good action. I guess the best way to sum it up is to go through these trips one by one.

Vic and his buddies wanted to do some snapper fishing so we set up an evening trip. We left the dock before 6:00 and headed for the fishing grounds. The first thing that I noticed when I arrived was that there was zero current (not good). I moved around to see if I could find moving water but it was not meant to be. We set the anchor and made the best of the conditions. The yellow tailing was slow but we did limit out on some real nice mangroves after dark. Everyone went home with lots of fish. Next time they’ll be back for giant cubera snapper.

My next trip involved a young couple and their two young kids. Our goal was to get the kids on some steady action and we did. They both caught a bunch of jacks and small muttons even though we once again had very tough conditions. Even mom and dad got in on the action.

Pierre, a long time client was visiting with his father in law. We headed out with some live bait and started to work the reefs and county wrecks. After tussling with some very large spinner sharks we hit some deeper ledges and caught a combination of vermillion snapper, almaco jacks, and red porgies. We also lost a nice king boat side after it bit through the wire. Earlier that day we caught a very large barracuda.

Juan and his friends were visiting from Seattle and wanted to give the fishing a shot. We only fished a half day but were able to catch some nice yellow eye snapper, almaco jacks, barracuda and a nice horse eye jack. We did spend some time dodging rain which didn’t help.

On a half day with Larry we caught a couple of large sharks. One of the sharks was a large spinner shark that put on quite a show for us. We also caught some bonito and jacks.

Earlier this month I had Vic back on the boat but this time he wanted to target big cubera snapper. I gave him all of the information and told him which night would give us a good shot and everything went pretty much according to plan. I left the dock with about a dozen live blue crabs and a few live lobster that we would later use as bait. We made it to the grounds by dusk and started baiting a couple of hooks. On our second or third drift we hooked up and a beautiful 35 pound cubera hit the deck. After exchanging some high fives it was time for the other guys to hook up. We got at least 6 or 7 more bites but it seemed that the fish were getting the best of us on this night. Nonetheless, we headed back tire but happy. I’m pretty sure we’ll be doing it again next year. 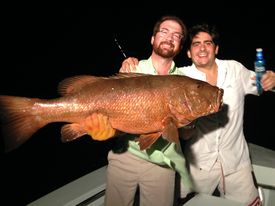 Tom and his coworkers wanted to get out for a half day and bend some rods so we did. We enjoyed steady action especially from the bonitos which seemed to be out in force. Our first bait was eaten by a very large blue runner who got eaten by a massive shark. After a long fight on the 20# spinning rod the fish finally wore throughout the leader. The guys still had fun watching the power of this fish. 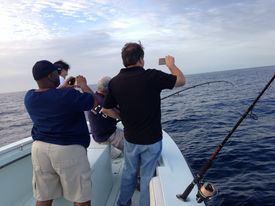 On my next trip I had a group from Denmark and great weather so I decided to run offshore in search of mahi. I found a great looking weed line with lots of bait but no dolphin. After working it for a while, I headed back in to see what we could find. Our first fish was a bull shark estimated at about 250 pounds or so. We also caught a nice kingfish and a few bonitos. 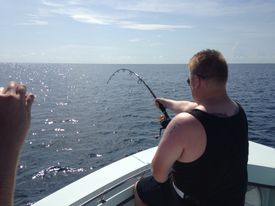 Tom and Shereen were able to get in a half day before heavy rain forced in. Tom ended the half day trip with a sailfsh, several bonito, jacks, and a bunch of vermillion snapper for dinner. The couple now has a few fish stories to tell back home. 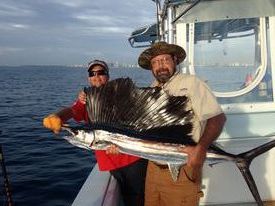 Finally, on my last trip I did some daytime sword fishing with one of my regular clients aboard his boat. We got one bite on two drops before the patience of the kids ran out and they decided to go snorkeling instead. We’ll probably be doing it again soon, so stay tuned.

We’ll, there you have it. Pretty soon the air temperatures will start falling and so will the temperature of the water bringing improved fishing to South Florida. Right now its time to start getting ready. Pretty soon, I will start bait fishing at night and filling my pens with frisky goggle eyes that will hung of kites for sailfish, kingfish, and mahi.