Since my last report, I took some time off to go on a family vacation. I did do some trips before and after. Most of my trips have been offshore dolphin trips. On these trips we typically spend our day “running and gunning” in search of sargassum, floaters, rips, and last but not least, birds. So far this season the dolphin fishing has been very consistent, we have been catching them every time we target them. Catches have ranged from just 4 or 5 fish to more than 20. All of the larger fish have been found swimming under frigate birds with the exception of 1. Our largest mahi of the season (38 pounds) was caught just last week under a weed line mixed in among some smaller fish. The fish ignored our first offering but quickly found and ate a live cigar minnow that was cast in his direction.

Closer in on the edge of the reef the action has varied. Some of the fish being caught are bonitos, kingfish, amberjack, and some snapper and grouper. On days with clean blue water and good north current there have been some sailfish around too. Most of these fish are being caught around reefs and artificial wrecks on live bait.

On one of my recent trips, I had a couple and with there two boys and I took them snapper fishing on one of my favorite shallow wrecks. The boys had little to no experience but after a little coaching they were reeling in some flag yellowtail snapper. We also had some very large jack crevalles move into our chum and eat some of the baits intended for the snapper. We ended up landing 3 large jacks on 10# pound test spinning rods. Everyone on the boat couldn't believe how we landed extremely strong fish on such light tackle I normally release all of these jacks but the boys insisted on taking them home for dinner along with their yellowtails. 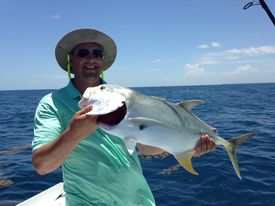 If you enjoy dolphin or snapper fishing, now is the time to book your trip. The mangrove snapper spawn is just getting started and the fish will be big and hungry especially at night. Yellowtail can be caught either day or night but are a bit easier during low light hours. Mahi will continue to come through for a while. You can also expect to see fewer boats offshore once the spiny lobster season opens.

Speaking of lobster season, it almost here. If you are planning to get out there, remember to play it safe and keep safety in mind. No amount of lobster is worth someones life, so use your best judgement and follow the rules and regulations. Make sure you get the latest and most up to date information from the FWC.

Well, that is pretty much it for right now. I have several trips scheduled through the end of the month and hope to have another report real soon. I just got back from the ICAST show in Orlando and it was great to check our the latest in fishing gear and talk to so many folks in the industry. Also, don’t forget that you can keep up with all of the action by following us on FACEBOOK, Instagram, and Twitter. If you like watching some of the action, be sure to check out my YOUTUBE page for the latest video additions.