The past few weeks have been interesting to say the least. First, we finally got some cooler weather that helped the bite and triggered some fish to move through. Unfortunately, we’ve had many days this season of little to no current making the fishing challenging to say the least. Action has varied greatly with each outing. Hot one day followed by tough conditions the next. Now, let’s talk about some recent trips.

Long time clients Pierre and Marie wanted to catch sailfish and tarpon so we set up an afternoon/evening trip. The last time we fished we had green water, no current, and no wind. Needless to say the sailfishing was very tough on that trip. We did manage to get Pierre hooked up near the end of the day but after a couple of quick jumps the fish through the hook. On there last trip the fish gods were definitely on their side. I had goggle eyes, pilchards and herring in the livewell and the conditions were perfect. We had clean blue water, strong current and good wind. On our first drift we didn’t get a bite but I new that it was only a matter of time. After setting up again, we saw a free jumper just north of our kite baits. I told Pierre to be ready and after a couple of minutes the fish was chasing one of out baits around. The fish ate cleanly and we eventually caught and released that fish after a couple of quick pics. Next, it was Marie’s turn. First, a rat sail (small fish) ate the bait but quickly spit in out. Shortly thereafter we had a double and she was on again but after a short fight the fish leaped out of the water throwing the hook. Marie was eventually able to land the second fish and scratch it off her bucket list. We later ran in to tarpon fish but the duo was pretty worn out and decided to head in early and leave the tarpon for next time. 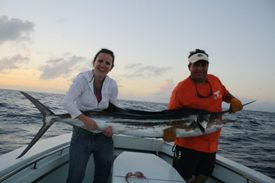 Greg and his wife Jenny have caught sailfish before but this time they wanted to catch his dad one. Conditions on this day were decent except for the current which was almost non-existent. We fished for about four hours catching dolphin(mahi), bonito, grouper but no sailfish. I felt confident that we could catch one by days end but unfortunately we encountered an electrical issue that forced us in early. Now, Greg and I are trying to put together another trip.

On my last trip I had the Castella’s, a father and son team which had fished with me a couple of years ago. Our last trip together was great, we caught several muttons, cobia, kinfish, and ended the day with a slob blackfin tuna. On this trip things were quite different we had to work hard for every bite. After netting some pilchards to use for chumming and bait along with some goggle eyes we headed out and set up. Action had been very good the day before so expectations were running high on my part. Our first bite of the day came on the long kite bait (goggle eye) when a huge kingfish took a couple of swipes at the bait. Unfortunately, the fish cut the bridle used to attach the bait to the hook and eluded the Mustad circle hook. After this bite we added a grouper, cero mackerel and had a couple of cutoffs. Later after a short lull in the action we had two sailfish swim into our spread and both father and son hooked up. Both fish ran together for a while but then decided to swim in opposite directions. After quite a long battle we were able to get some nice pics and release the fish to fight another day. Neither angler had ever caught a sailfish before so it was especially rewarding for me. 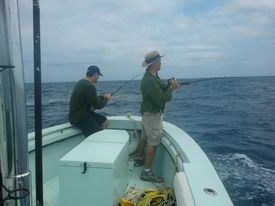 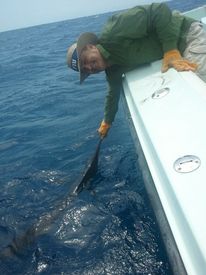 Well, there you have it. We have some more trips schedule for the upcoming week and the fishing should only get better as we move into next month. I still have openings in April so check out my new website and contact me if you want to book a trip or simply have questions. Also, for those of you that want to learn more about sailfish and tarpon I will be conducting a seminar at the Coconut Grove West Marine on US 1 this coming Wednesday at 7:00 p.m.