Southeast Florida dodged a bullet named hurricane Irma. A last minute shift to the west saved us from a direct hit. Unfortunately, our neighbors to the west and south did not fare as well. The Florida keys, especially the lower keys suffered catastrophic damage that will take a while to recover from. Our thoughts and prayers are with these folks and their families. I know that the strong people of the keys will rebuild and make the keys better than ever before. We also have to commend the federal, state, and local governments and first responders that helped everyone before, during, and after the storm.

Personally, I did not suffer any major damage as a result of the storm except for a few downed trees and a sunken dock box. Luckily, I was able to store the boat in a bunker like warehouse where it was as safe as could be. My marina and home base did suffer some damage but my personal dock fared and is ready to go. Repairs to the facility are underway and we are back to doing what we love to do.

Just like with any storm, the bite seemed to spike in the days following the storm. Offshore, lots of mahi were found under floaters (floating debris) and even a few wahoo. Although the mahi bite has tapered off a bit in recent days, I expect it will bounce back at least once more before fall like weather moves in. 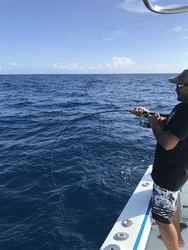 On my last post storm charter, my client wanted to learn a bit more about vertical jigging so we left the dock without a single live bait (this always make me a bit nervous). We hit numerous wrecks and ledges ranging from about 100’ out to 350. On our first drop we were cut off so I decided to add a trace of wire and that did the trick. The next 10 minutes produced 3 kingfish. Later that morning we added several a black grouper, several almaco jacks, and a bonito. Not bad considering that we had to head in by 10:45. 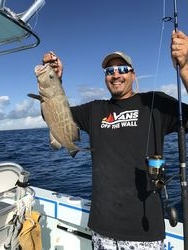 Kingfish are starting to show up in better numbers and they are providing most of the action along the reefs. Most fish are being caught on a combination of live bait such as pilchards or herring and/or trolling using planers or deep diving lures. Keep in mind that this method will also produce an occasional wahoo. 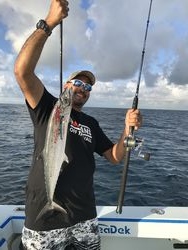 Another good idea right now is to anchor up and chum for yellowtail and other assorted snapper. The yellowtail bite has been very good especially down toward the souther end of the Miami-Dade County. Although it is a bit of a run, it can be a really good options when the weather and conditions are right. Not only are snapper fun to catch but they are also great table fare.

Well, that’s pretty much it for right now. Remember that the best way to help get back to normal is to do what you enjoy. Let’s get out there and catch some fish!