Over the last few weeks the fishing has improved pretty dramatically both inshore and offshore. The action should continue on the to improve as the days get longer and the water begins to warm up a bit. Other important elements that were missing earlier in the season were clean blue water and a good north current. It hasn’t been perfect but it has been much easier to find these over the last month or so.

Inshore we have done several tarpon trips and I can honestly say that the tarpon fishing is pretty consistent right now. We have been catching silver kings both on the beach around Government Cut and also around the bridges when tides are favorable. Most of the tarpon have been caught on live shrimp but lately the crabs have been producing more and more. I also did a couple of trips with kids targeting and catching a variety of species around inshore reefs and wrecks. On these outings we caught and released black and gag grouper, mutton, lane, and mangrove snapper and an assortment of jacks, mackerel, etc.

Offshore, the biggest challenge has been finding enough quality live bait. I’ve actually been bait fishing on my days off in order to secure quality live bait for our charters. Once we secure bait the fishing has ranged from good to excellent. Most of our fish have been caught on a combination of baits including threadfin herring, pilchards, blue runners, and pinfish. Now let’s get down to some recent catches.

Vic and his friends teamed up to catch three sailfish, kingfish, and a beautiful cero mackerel. Two of his guests caught there first sailfish on this trip and were lucky enough to get most of the action on their GoPro cameras. You can check out the video by visiting by YOUTUBE page:https://www.youtube.com/user/Fishingchartermiami/about .

On our next trip the action slowed quite a bit for Josh and Nick and we ended the day with a couple of nice mahi despite a lot of hard work. It is trips like this that help us appreciate the good days.

Freddy was visiting from the Mediterranean and want to catch his first tarpon. After several drifts we hooked up to a silver king and later released the fish at boat side. Freddy was ecstatic and amazed at the strength and stamina of these fish. He also caught a combination of bluefish, ladyfish, and a jack.

Alex and his group got off to a slow start before we got into some really good action. The girls each caught their first amberjack weighing between 30-40 pounds. Both fish were caught on a deeper wreck in 200+ feet of water. The group also caught kingfish, barracuda, and a shark. By the end of the day they were all very tired with soar arms.

The Dawson family wanted to fish in the tranquil waters of the bay and enjoy some light tackle action. Her son loves to fish and was amazed at the variety of fish we were able to catch on a half a day. He caught a bunch of mutton snapper, black grouper, gag grouper, yellowtails, mangrove snapper, jacks, etc. Although most of the fish were undersized, we had a blast with all of the rod bending action. Bay trips are a great way to introduce the young ones to the sport since it doesn’t require a great deal of patience.

Darren and his dad booked a morning half and just wanted to have a good time. We had a strong east wind which made for a bumpy ride out but the good news was that the fish were chewing. We caught and released Darren’s first sailfish and added an amberjack, dolphin (mahi), and lost another large fish on the bottom rod.

Kim and her two boys were running on fumes when they arrived at the boat on less that two hours of sleep. We also had pretty sporty conditions to start the day along with poor bait fishing. After getting enough bait we headed out and put out the kites. After a relatively short drift the bottom rod began screaming as we watched the 50# braided line melting away. After retrieving some of the other lines, we gave chase but this fish had other plans and eventually wore through the 80# leader.

The fish pumped enough adrenaline through everyone to them going. Shortly after setting up again, we came tight on the first sailfish of the day. Everyone was thrilled but now we needed two more. Later that day we hooked up to a double header and both boys picked up the rods and again released their fish after some quick pictures. Finally, with only minutes left in the 6 hours trip Kim got hers and everyone celebrated. The group managed a perfect 4 out 4 sails and everyone got their first spindlebeak. Even though trips don’t always go as planned, it was very rewarding to see everyone smiling before heading back home.

Mario booked a full day with his kids and had an action packed day. Fishing was a bit slow early on but we did manage to hook up to a sailfish before he ran under the boat and parted the line. Later in the day we caught a real nice amberjack some kingfish, and a bunch of smaller amberjack. We also hooked and fought some really large bull sharks that were trying to eat every fish we hooked. 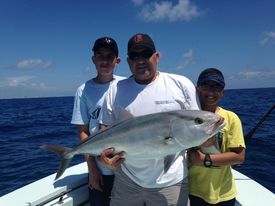 Pat and his wife Lori came down from Texas looking for his first sailfish. On this day the sail fishing had slowed down but we were determined to make it happen with a well full of frisky live herring. Our day started by catching kingfish, bonitos, and a nice mahi. The wind was very light and I had to use helium in order to keep the kite aloft. The only two fish to eat the kite baits were mahi so I was starting to worry. Finally at 1:30 the mid depth rod doubled over and Pat was tight on his sailfish. After a 20 minute battle we snapped some quick pics and release the fish to fight another day. Our day had finally come full circle. 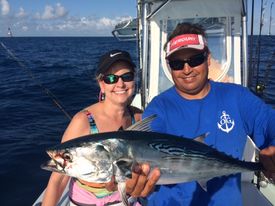 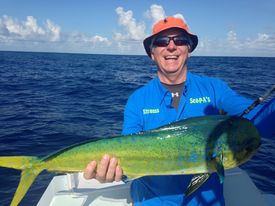 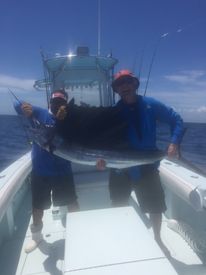 The next day John booked a morning half and once again sailfish were a bit scarce. We started the morning by anchoring a wreck that had been producing well for me and caught two amberjack and missing a couple of other bites. We then picked up and ran down south looking for better conditions and got two double hook ups on bonito. Shortly after landing the second pair of bonito it was time to head for the barn.

Later that evening I did some tarpon fishing with Gabriel who was visiting from Brazil. Although the fish were around in good numbers, strong south winds littered our fishing area with thick sargasso weeds. The thick weeds made it imposible to present the baits in the proper way. We moved over to a different area and hooked up almost immediately. After a long battle Gabriel got his fish along with a few pictures and even some video. He decided to call it a night after landing his fish.