Well, it’s that time of year again. Temperatures are hanging around the high 80’s and 90’s on a pretty consistent basis. I’ve done several trips since my last report and we’ve caught a some dolphin, bonitos, kingfish, jacks, muttons, and yellowtails. About a week or two ago winds shifted and started to blow out of the SW pushing the mahi way offshore. I spoke to several other area captains that reported finding them out as far as 25 miles. Since then, most including myself have opted to spend more time fishing the reefs and wrecks.

Some of these shallow wrecks have been holding huge jack crevalles and they are chewing both live and cut bait. We’ve had a lot of fun catching these jacks on the light tackle we normally use for yellowtail and mangrove snapper. On some days the jacks have been so aggressive that we’ve had to move in order to catch the snapper. 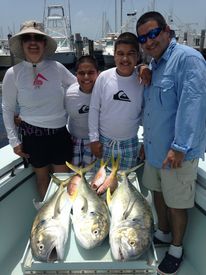 Speaking of snapper, we’ve been catching them mostly over hard bottom from 50’-80’ of water. Again, we are using light tackle in combination with fresh bait like silver sides, shrimp, and bonito strips. All of these trips have been during the day when it is the toughest. Yellowtail and mangroves will bite much more aggressively after dark.

On some of trips we have caught some really nice muttons on the bottom rod. Most of these fish have been in the 4-7 pound range. Even thought they aren’t giants, they do make some of the best tasting table for we have. I am hoping to catch a few more of these on my next trip.

The action along the edge of the reef has consisted mainly of a lot of bonitos along with a few scattered kingfish and wahoo. Most of the kingfish and wahoo are being caught on the troll. Trolling will remain productive during the late summer and fall. The key is to get the baits or lures down past the surface. Wahoo will continue to show up especially around the full moon.

Before you head out, be sure to check the weather forecast. Summer weather can be pretty unpredictable and safety should always be the first priority. Make sure you have all of your safety gear and a working VHF radio. Taking these precautions can make all of the difference and prevent accidents on the water.

Finally, for those of you interested. I will be conducting a seminar at the Miami Bass Pro Shops located at Dolphin Mall. The seminar will cover all aspects of live bait drift fishing and will take place this coming Sunday, August 9th at 3:00 pm. Stop by and say hello.