May and Early June Fishing Report

My last fishing report was titled “May Fishing Ready to Peak” and boy was that right. The month of May saw some of the best action of the year. Variety was the name of the game but the best action definitely came in the form of blackfin tuna. After arriving a bit late, they finally made it in and with a vengeance. Besides the tunas we also caught several sailfish, dolphin, mutton snapper, kingfish, and an assortment of jacks.


Most of the blackfins have been caught in the late afternoon and evening using live herring. Although a lot of them have been caught off the kite, we’ve also caught our fair share on flat lines and deep lines. On our best day we hooked a total of five tunas and landed three. Unfortunately, two fish fell prey to a hammerhead shark and a large barracuda. The shark was so impressive that my anglers booked a trip the following week to target them. 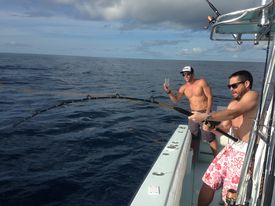 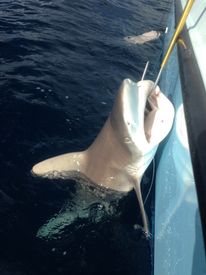 Although we caught several sailfish in May the action seemed to be a little slower than last may. I was surprised not to se more sails since we enjoyed clean water and north current on most trips. Hopefully, we’ll get another push of sails before the water warms up and they begin to scatter offshore.

May also saw several large kingfish up to about 30 pounds. The largest king ate a goggle eye fished under a kite. Other big kings were caught on flat lines and deep baits. We are still catching kings but I haven't seen any smokers in the last couple of weeks. I think we might see a couple more large fish before it’s too warm.

If bottom fishing is your game, now is as good a time as any to wet a line. We have been catching some really large amberjack over the deeper wrecks with some fish close to 40 pounds. Also, hanging out around the bottom have been good numbers of mutton snapper. Muttons have been falling for both live and fresh dead bait. The mutton bite should remain strong for at least another month or month and a half. 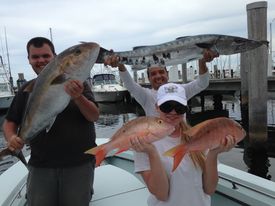 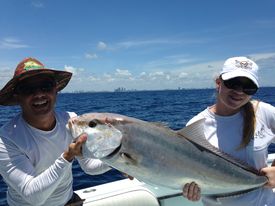 Offshore, the dolphin bite has been pretty consistent even though there has been a lot of small peanut dolphin mixed in with the keepers. Normally, these smaller fish don’t show up until later on in the summer. Either way the fish have been around in decent numbers and we have been catching them regularly while fishing the edge. I have some dolphin trips coming up here in the next couple of days and I’ll be sure to report on those as we get them in.

Before I wrap things up I’d like to say that I am pretty disappointed in what is happening with our bait. The loss of Bug Light hit our fishing community very hard but as if that wasn’t enough the dredging in Government Cut has just added to the frustration. Over the last year this project has disturbed several miles of sensitive habitat that is essential for our bait fish to survive. Every time I run through the cut I see milky water spewing in every direction. I also see barges loaded with this muck towed and dumped relatively close to shore. Nobody knows how this will impact things in the future but only time will tell. Hopefully this project will end soon and things can begin to heal.