To say that this summer has been one of the best for mahi fishing off south Florida would be an understatement. Even thought the season got off to a slow start during May and June, the action has been fantastic since early July. Not only for the sheer number of fish coming through but also for their size and consistency. It seems like on most dolphin trips we have been able to find large schools of good sized fish. I honestly don’t remember ever using the gaffs for mahi as much as we have as of late. 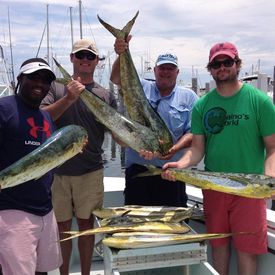 Most of our fish have been caught using the “run and gun” method. We have been running offshore looking for weed lines, diving birds, and floating debris (not necessarily in that order). Once we find one or more of these we slow troll live bait in order to locate the fish. After finding a school we’ve been casting cut bait, jigs, and more live bait in order to hook more fish. 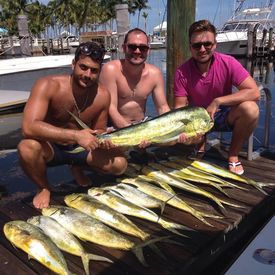 Weedlines have been pretty plentiful which is good but on some days it has been a little difficult to find the productive ones. The lines with diving birds have definitely been the better ones with the larger fish. Most of the mahi we have been catching have been averaging 5-10 pounds but fish of 15-20 pounds have been pretty common with a few over 20. Our largest dolphin of the season was a 60” bull just shy of 40 pounds.

Besides the excellent mahi fishing, we’ve also fished the reef on several occasions. On the shallower reefs we have been catching a healthy mix of snapper,grouper, kingfish, sharks, and bonitos. The best action has come when we anchor up around reefs or wrecks and chum the fish up to the boat. I can’t tell you enough how much I enjoy this type of fishing. It’s always nice when the fish come to the boat and you can actually see things happening all around. 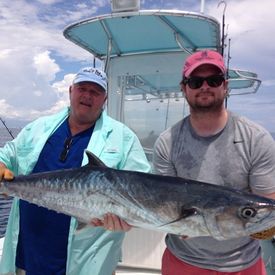 On my very last trip, we had our best action on the bottom rod. It seemed like for two hours straight we couldn’t keep a bait on the bottom for more that 10 minutes. My lone angler caught 3 mutton snapper, 1 black grouper, and two sharks on the bottom rod. He also lost several fish to large sharks patrolling the bottom. The action did not let up until the current slow to nothing and actually changed directions. 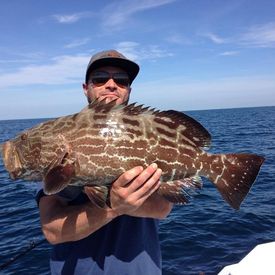 September and October are usually transition months where the charter business slow down and its time for boat and tackle maintenance. Later this week I will be going over all of my kite fishing gear and respelling all reels with fresh monofilament. Bait pens will be getting their yearly cleaning in anticipation of the upcoming sailfish season. We have some more trips scheduled later this month and hopefully the action will stay as hot as it has been.