Before we get into the heart of the fishing report, I would like to apologize for the delay in reporting. Between charter fishing, bait fishing, and boat maintenance I seemed to have lost track of time. Well, now that we got that out of the way, its time to get down to the fishing both inshore and offshore.

Inshore, tarpon fishing continues to be a little hit or miss. The best action has come at night especially around the bay bridges. Areas like Miami’s Government Cut have been sporadic when it comes to producing fish. On my last tarpon trip we made three drifts off the beach without a nibble. Two other boats were working the beach on that night and they didn’t hook up either. I’m hoping that more fish show up before the Miami International Boat Show which starts next week.

Offshore the action has been much better on most trips. Sailfishing has picked up considerably over the last week or so. We are starting to see more blue water which was mostly absent earlier in the season. We’ve also seen more and stronger cold fronts packing north winds that seem to stimulate the bite. Some of the best days on the water have come on right before and after these fronts when the winds have been pretty strong. On many trips we’ve also the benefit of good north currents. The good currents, blue water, and northerly winds is always a winning combination. 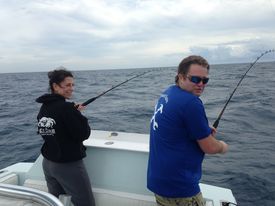 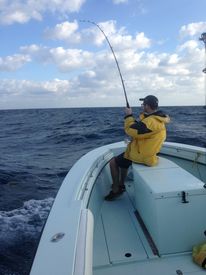 Another significant change since my last report has been the presence of more and larger kingfish. The only negative to the kingfish actions is that it hasn’t been as consistent as other years. One minute the bite is red hot and the next minute you can’t buy a bite. On a recent trip we got into the best kingfish bite that I have seen in years. We couldn’t keep a bait in the water long enough for a sailfish to find it. We finally had to purposely power drift away from the kings in order to catch some sails. The day ended nice going 3 for 3 to finish the day.

On other trips mahi have saved the day by providing action as well as dinner. Even though we haven’t caught them in large numbers, they have all been nice gaffers. The key to targeting these dolphin is to fish on the blue side of the current edge whenever possible. A lot of the mahi have been around areas holding scattered weed lines and flying fish. Another key factor to consider is that these fish will move closer to the reef after a period of east winds.

Other catches that we’ve made include mutton snapper, yellow jacks, and even some cobia. Even though we’ve been kite fishing on most trips, I still like to send a bait down to the bottom just in case. On many trips this rig accounts for the best fish of the day. Hopefully we can catch some more of these beauties on my next trip. 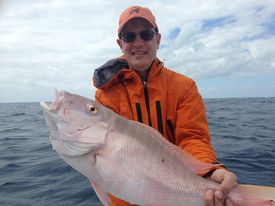 We’ll that’s pretty much it for right now. I’ll see you at the upcoming Miami boat show next week while we check out all of the new boats, engines, and tackle. Also, don’t forget that you can keep up with all of the action by following us on FACEBOOK, Instagram, and Twitter. If you like watching some of the action, be sure to check out my YOUTUBE page for the latest video additions.