Well, it's been almost a month since my last report so there is definitely a lot to catch up on. Over the last month we've had periods of high winds and intense rain making virtually impossible to get out. Lucky for me, I seemed to have scheduled my trips on the right days for the most part. June kicks off the start of the summer fishing season and all of the tasty species that come with it.

Offshore the main focus has been dolphin, dolphin, and more dolphin. I've been out in search of mahi a couple of times and haven't been disappointed. We have caught more than enough fish for the table. Larger fish have been eluding us and will probably be a little more difficult to find as we go deeper into the season but you never know.

Closer to shore on the edge there are still quite a few sailfish around especially on the days when the current is running hard to the north. Yesterday, while I was dolphin fishing one of my good friends had four shots at the spindlebeaks. Another option around the edge is to anchor up on one of our countless wrecks. Right now is a great time to target big mutton snapper, grouper, and a variety of jacks. Fishing the wrecks also allows you to fish a couple of baits on the surface helping you catch tunas, kings, sails, and sometimes event mahi.

Here is what some have caught on recent trips. Freddy and Jim teamed up to catch a there limit of yellowtail, jumped a sail, and landed a couple of bonito all while anchored. Somehow these guys always seem to catch a bunch of fish. Now, they are trying to book their next adventure.

JJ wanted to fish on his boat so we gathered some bait and headed out. Unfortunately, conditions on this date were less than ideal. We had no current, dirty green water, and no wind. We ran around for a while and then the wind kicked up a bit. The kites went up and we caught some bonito, cudas, and missed a sail.

A few days later it was JJ again and on this day the action was very good. In just a half day we caught three real nice blackfin tuna, a nice cero and released a few other fish. Both JJ and his guests had a great time both with the fishing and the tuna steaks they got to take home. 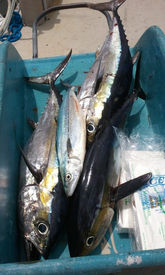 Jamie, John, and Colin wanted to scratch of some fish of their list and we did just that. Even though the conditions were a bit tough we managed to keep the rods bent for most of the day. We caught all of the following species: shark, yellow jack, bonito, almaco jack, grouper, another I can't' remember, and missed a couple of kings.

Tony, Rachel, and the boys fished a morning half and let's just say the weather made the fishing difficult. We caught a king, mahi, and some bonito.

Ronaldo was visiting from Puerto Rico and wanted to sample our fishing with some of his friends. Conditions on this day were ideal for anchoring and that is exactly what we did. It didn't take long before we had our first bite. To make a long story short, we ended the 6 hour trip with 3 muttons to 10 pounds, a four pound mangrove, several horse eye jacks, a huge yellowtail (head only), and a couple of huge triggerfish. The guys had a blast and enjoyed the wonderful weather. 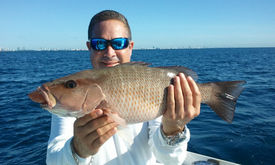 Yesterday I fished with JJ again on his family boat. A dead battery got us off to a late start but after some looking we hit a very large school of mahi. The entire family got in on the action while I stayed busy unhooking, baiting, and cleaning (lots of cleaning). Needless to say, I was filleting fish for a while. Now everyone is itching to get out again. 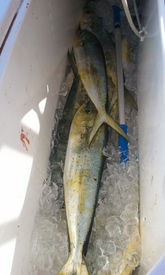 Well, that pretty much covers the action for now. Stay tuned for the next report as there is some exciting news and fishing coming soon. As always you can follow the action on Facebook, Google + , and Twitter. Don't forget to LIKE us for more frequent and up to the minute reports.

I still have several open dates for late July and early August. If you need more information just call, email, or even text and I will be glad to help out.