After waiting for a while we finally got the colder temperatures we have been praying for. On Saturday, we woke up to shifting winds and much cooler weather and boy did it feel nice. A combination of unusually warm weather and many days of little to no current have made the early part of this season very challenging at times. The good news is that fish, particularly sailfish will eventually migrate south. It is for this reason that many are predicting a HOT ending to the season.

While many (including myself) were at the boat show catching up on things away from the water, a few made it out and were rewarded with double digit catches that haven't been common this year. On Sunday there were lots of tailing sails riding the waves. I spoke to one of the captains and he reported that they only caught a small portion of the fish that they spotted. Later this week another front is expected to pass and hopefully push more fish our way.

Besides the sailfish action, mahi or dolphin as we like to call them have also started to show up. Unlike the dolphin we catch in summer these fish are usually swimming fast and don't hang out long enough to catch the real big numbers. One very positive thing is that these fish are usually really nice in size. On some days we can easily catch half a dozen while sailfishing. 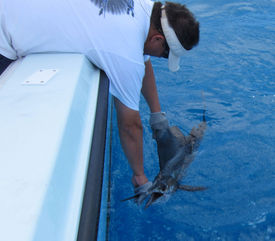 Another staple of winter time fishing that came around recently is the kingfish or king mackerel as they are know in other parts. Most fish are being caught either drifting or anchored while fishing live pilchards or herring. Kings are great fighters on light tackle and often help mix things up while sailfishing. March, April, and May will probably bring us some really big ones.

If offshore fishing isn't your thing, then you might want to go tarpon fishing. The tarpon bite has been one of the most consistent so far this season. Lately, it seems that the fish have moved south to Government Cut and South Beach. Catching a large silver king on 20 lbs. tackle is a thrill for any angler. Pretty soon many of the fish caught will be in the 100+ pound range. Another added bonus to the tarpon trips is the occasional permit. If you've never done this type of fishing you owe it to yourself to give it a try.

Well, there you have it. I still have some open days and nights later this month and several in March. So if you're thinking about going remember to call early in order to secure your date. If you need information about a particular trip, feel free to call, email, or text at 786.266.0171 or omuniz@bellsouth.net.