If you enjoy good fishing then the next two months will feel like the holidays. The last month or so brought us good fishing but April and May should bring us the best action of the year. Before we dive into the future, let’s talk about what’s been going on for the last few weeks both on and off the water. The biggest news off the water is that the “NOMAD” has moved to a new and better location. We are now docked at Dinner Key Marina in Coconut Grove (Pier 8, Slip 19), just west of the Miami City Hall. The marina is centrally located and will soon have a brand new state of the art dock master facility. Now, let’s talk about some of the fishing. 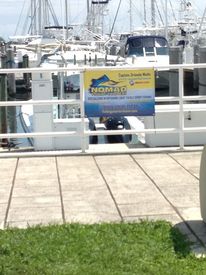 Inshore fishing for tarpon has been pretty good at night especially around the bridges with an outgoing tide. Fishing around Government Cut has been a bit erratic and a lot less consistent. It seems like one day the fish are around and feeding and the next day the bite shuts off. If last year is any indication, I think the fishing will peak very soon. I’m not sure if the extensive dredging around the cut his having an effect on the fish but it is pretty hard to believe that it isn’t.

Offshore, we’ve done a variety of trips with very mixed results. Catches have included: sailfish, dolphin, kingfish, snapper, and grouper. Today, we were supposed to be out sailfishing but the forecast of north wind of 20-25 knots and gusting to 30+ made us bump the trip to tomorrow when conditions may improve a bit. Last week there were quite a few sailfish around despite very light winds. Fortunately, we did have decent current and some blue water. A lot of the fish were caught on the deeper baits. We actually caught one on a pinfish down on the bottom intended for a grouper, snapper, or cobia. 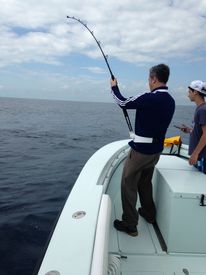 Kingfish have also been around in good numbers and we’ve caught them on both live bait and on the troll. Most of the kings right now are falling for threadfin herring and pilchards fished on flatlines. Some kingfish have also been caught on the deeper baits and even baits fished of the kites. A lot of the kingfish we have been catching have been in the 10-15 pound range but I know that some of the big smokers are starting to move in to the area. Look for more of the big bruisers to start popping up very soon.

Dolphin catches have also been pretty consistent, especially during periods of easterly winds. Although the numbers haven’t been great, they have been fish of pretty good size with many fish in the 10-20 pound range being caught. Just like the kings, look for some slammer dolphin to start showing up. I suspect that sometime around May we’ll see a lot of these big fish caught over a period of two weeks or so. Hopefully, we’ll be out there when they show up.

Even though we don’t do a lot of bottom fishing during the spring, we have caught some really nice bottom fish both drifting and anchored. Most of the fish that we have caught on the drift have been muttons and black grouper. Unfortunately, grouper season will remain closed until May 1st. On one of our trips last week the live bait fishing was a bit slow so we decided to anchor up on a shallow wreck and take a gamble. Within a few minutes, we had the chum going and fish in the slick. We ended the trip with a great afternoon of catching flag yellowtails, spanish mackerel, assorted jacks, and more. While anchored, we had a pack of cobia come around the boat but wouldn’t eat. It was nice to see cobia showing up. Pretty soon they will be eating our baits. 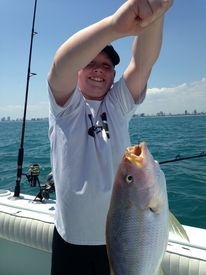 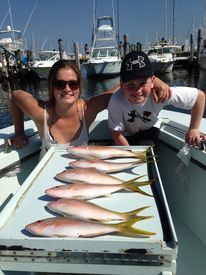 We’ll that’s pretty much it for right now. Don’t forget that you can keep up with all of the action by following us on FACEBOOK, Instagram, and Twitter. If you like watching some of the action, be sure to check out my YOUTUBE page for the latest video additions.